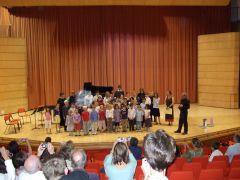 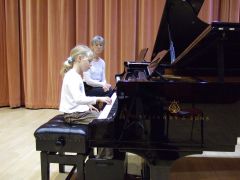 “We really had an excellent week at the workshop. My daughter was talking about it for weeks and during the actual week she couldn't wait for the next day to begin. It was also very motivating for me! A good way to start the holidays. It was really wonderful to see and hear Kathryn Stott playing and teaching. And the final concert… well, a perfect end. Thanks!”

“For us, I think it was the best workshop so far… just the combination of Kathryn, Hannah, Graham, Jacqueline etc. gave each day something really special.”

“I loved your lessons, Betty”

For the second year, the programme included a Minstitute for children ages 3—5. This included morning classes in Dalcroze Eurhythmics with Jacqueline Vann, Kodály Musicianship with Betty Power and attendance at lunchtime concerts.

Twelve non-CSYM students (including children from Denmark, Spain and the USA) aged 5—10 enjoyed singing games with Betty (in English!) first thing each morning, while CSYM students aged 5—11 continued their Kodály Musicianship and Dalcroze studies on a daily basis.

Suzuki Piano Lessons for students in Books 1—2 were expertly delivered by Caroline Gowers (working non-stop for us in Esther’s absence) and observed by teachers on the Teacher Observation Course who had travelled from Canada, Spain (and Newmarket!) for the opportunity.

The Contemporary Chamber Music course for Advanced Students focused on the preparation and performance of UNCERTAIN by Graham Fitkin, a three-movement work for two pianos and string quartet commissioned by Cambridge Suzuki Young Musicians with generous support from the Performing Rights Society and Cambridge City Council. These students also received daily sessions in composition with Graham Fitkin between their ensemble rehearsals, while students in Books 1 and 2 performed two separate composition concerts. 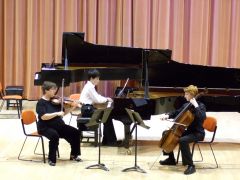 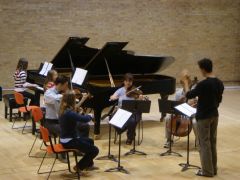 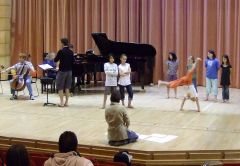 CONCERTS. In addition to the Finale Concert and Premiere of UNCERTAIN, seven different student concerts took place during the four days, featuring Book 1 and 2 Suzuki repertoire, music by Spanish and Latin American composers, students ’ original compositions and Contemporary Chamber Music. (Seven concerts may actually represent a record for Suzuki Workshops in scheduling the most student performances over a 4-day period! — most workshops have one lunch-time or tea-time recital at the most.) Kathryn Stott’s Masterclasses and Recital represented Wednesday’s highlight — more on this in the section on Recital Experience below.

TALKS AND OBSERVATION. In their free periods, students and parents were encouraged to observe masterclasses and Graham Fitkin’s rehearsals of UNCERTAIN by students on the Advanced Chamber Course. Talks included an inspiring and challenging Parent Chat with Koen Roens, SAA Teacher-Trainer from Belgium; a fascinating Questions and Answers session on Wednesday with Graham and Kathryn on performance, practice and composition, and a Teenage Discussion Forum with Caroline Gowers on the topic of practice. 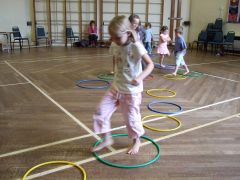 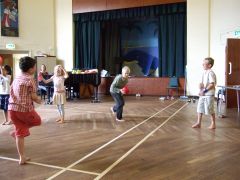 “Can we do again tomorrow what we did today? It was really fun!”

DALCROZE EURHYTHMICS. Evidence of the wonderful magic of musical learning through Dalcroze Eurythmics was observed by watching one of our 10-year-old students who had taken part in Jacqueline’s Plastique. While he listened to the second playing of the UNCERTAIN’S 2nd movement, he moved and interpreted each entry and motif as he sat in the audience. Obvious he understood the score from the inside-out, without ever being a direct performer or studying it. He had absorbed the music of a rather complicated and sophisticated contemporary score both aurally (thru listening) and physically (thru corresponding movement)

Dalcroze specialists such as Jacqueline are expert musicians who spend many years training, researching and developing their pedagogical skills. (As Suzuki teachers, we are many ways simpatico with the aims and processes of the Dalcroze teacher, and thoroughly enjoy working together, one of the reasons we would like to incorporate Dalcroze studies into our ideal Saturday ‘academy’ programme. Many professional musicians and organisations today call upon a Dalcroze specialist to help them approach new performances of music both old and new, and Dalcroze training is a regular part of the curriculum at junior conservatoire departments, e.g. the Guildhall, RNCM. You can learn more about the Dalcroze approach from the Dalcroze Society website. 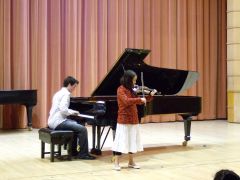 “Your music is wicked! Thanks for helping us with composition”

“Our thanks to you and the Committee for the very special workshop. Taking part in this event has been a highly beneficial experience for both of us.”

“I enjoyed my 2-day visit and found it very interesting, and Kathryn Stott's masterclasses and concert were very good. The final concert was wonderful too - I wished I could have seen the Dalcroze Plastique again.” 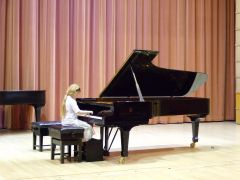 One of the course teachers

“We just wanted to say that we all loved the Minstitute. It has been a great experience for us”

“It was the best summer holiday ever and I want to go again next week!”

THE RECITAL EXPERIENCE. Concerts for grown-ups are usually too long and too late for children. Dr Kataoka suggested that parents take their children to the concerts of first-rate performers, buy the best seats where the children can see what is going on, and listen to the music beforehand frequently, so that the children recognise the music. That way you are working through the senses.

At the Institute’s Recital afternoon, the children had the added bonus of meeting the performer as teacher through her morning master-classes and her informal chat that day. Kathryn Stott is truly a high-class musician who works with wonderful musicians including Yo Yo Ma, Truls Mork, Janine Jansens etc. To take time out of her international performance and recording schedule to come to Cambridge to play for children and their parents was an exceptionally generous thing for her to do.

There was no dumbing down to the children and the concert at 30 minutes preceded by a question and answer session with Graham and Kathryn, was the right length of time for the audience of over 5s, and even two very quiet 4-year-olds. Audiences for classical music are gradually becoming over 50 and grey, so this is how to capture the young people and get them fascinated by the music.

Have the best performers and best music, keep it short and play masterpieces. Kodály said that only the best was barely good enough for children. Here the audience can become used to good concert manners, at a very early stage. No one would have dreamt of leaving in the midst of the recital, which is a good model for the children (and likewise one’s hope is that no one would leave in the midst of a children’s concert, having the same respect for the work of the child). One mother with a 4-year-old left discreetly after the three movements of the Ravel Sonatine, demonstrating good sense in leaving before the child got restless.

We are creating the audiences and music lovers of the future: what better way than through quality. The children were so quiet, especially at the magical soft end of the Faure. The composer, Graham Fitkin, was also in the audience and heard RELENT (a fast and fiendishly difficult piece he wrote especially for Kathryn’s superior talents), and so was able to acknowledge the applause with Kathryn at the end. (Kathryn said the piece never gets any easier!) A continuum of music from the early part of the twentieth century and music from the twenty-first century, with Graham Fitkin’s piece able to live besides the two masterpieces by Ravel and Faure; what a testament to its quality.

Music needs its new pieces to survive, and children need to be exposed to new music from an early age, before the prejudices of adults colour their senses, and before the social strangle-hold of popular music, with its clichés, takes grip and handicaps their imagination. Young children can understand everything through their senses, but do not distinguish what is quality (Turkey Twizzler vs. Organic Turkey for example). So it is up to adults to surround them with examples of good quality. A composer like Graham is interested in all music: influences from jazz, Stravinsky even Kylie Minogue, pop up in his music digested and rearranged by a superior decision-making process, intellect, and musical imagination: really music for our time, but due to its craftsmanship and integrity, music of the future too.

New music, quality of performance, quality venue, these are some of the positive influences on the children. But it is in the home that these lessons in quality and environment are best interpreted and put to good use, because it is in the home (not in the lessons) that ability is created. Further to this theme I recommend putting good quality music in the child’s home environment through attending concerts, buying CDs and DVDs.