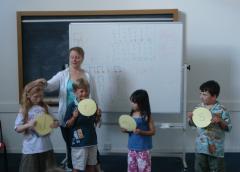 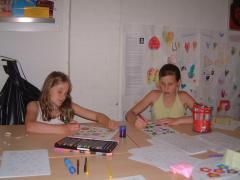 CONGRATULATIONS to CSYM students and thank you to all those CSYM parents who helped organise, manage and generally give full support to our workshop this past July. All activities took place at West Road Concert Hall, which made for a lovely, intimate and relaxed atmosphere. The children were able to receive very specific training and attention from each teacher, and parents could enjoy the company of friends old and new.

The most impressive feature overall was the concentration, purposefulness, and friendly happy faces of our students all week long (despite the heat!). Because the students were so well-prepared, our excellent faculty could really give something back to them. A high artistic energy pervaded, evident from the enjoyable concerts which took place daily, and the improvement and progress the students were able to make over an intensive four-day course.

When children had openings in their schedule, they could watch lessons, observe the four-piano rehearsals, or take a break at the Creative Corner, where they designed a 'Beautiful Hearts - Beautiful Tone' mural, made music-reading puzzles, practice charts, among other things - while listening to CDs!

Inspiring moments for us, as teachers, were re-uniting with our dear friend and colleague, Bruce Anderson, from Florida, as well as working alongside Dalcroze expert, Jacqueline Vann, and getting to know the brilliant and good- natured composer Huw Watkins. The personalities and expertise of the teachers are the key to a workshop's success, and we still are in agreement that we hit on gold again with this combination. 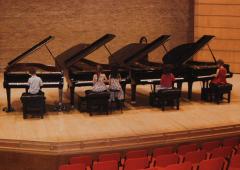 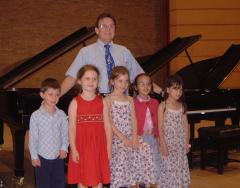 Bruce Anderson is a Suzuki piano teacher who has taught worldwide, in North and South America, Europe and Australia. And why is he in such demand? Well, firstly it is his personality, one that breathes warmth, sincerity, and conviction, and a solid understanding of Dr Suzuki's philosophy of education. This was not only apparent in his 'kick-off' first day talk, but also during his coaching of the children towards performance of their Book One & Two repertoire pieces on four pianos. Here he was crystal clear in his musical intention, master of communication/empathy with the children, and very precise instruction/involvement of the parents in the process of study, and of practice. Altogether a model of how to practise and create rapport with the children, providing parents with plenty of new ideas to help them with their day-to-day practice, long after the workshop finished.

The unison-piano practice is a weekly component of Bruce's home programme, taking place at his local Steinway store! Although we don't have a weekly practice venue like his, we are extremely fortunate to have the resources of West Road Concert Hall to provide a top-quality study opportunity for our students. Also, more valuable than an individual lesson, four-piano coaching of this standard involves the parents together so that they, too, are learning all the time. It would be to miss the point to think that the workshop is only for the children!

As Bruce pointed out, not only do the children make improvements musically and technically as they work on unison-piano repertoire, but the end result is a performance that surpasses any work they do on their own. This was demonstrated when the children performed their summer workshop piece again at the first lesson in September. 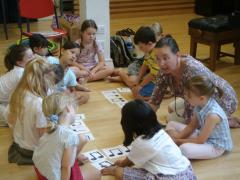 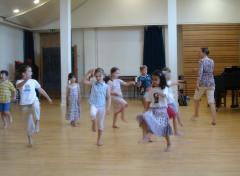 The X-factors in this workshop equation, i.e. X because you cannot measure the breadth of learning that takes place, are the Kodály, Dalcroze, and choir sessions. Musicianship training develops the inner hearing, and therefore the musical expressiveness of the students' playing. Because of the mastery of the teachers these classes are also done in a way that is musically appropriate, and enjoyable for the children, all the while strengthening those so important basics in their playing.

Dalcroze incorporates several strands of study; it is rhythmics that is usually taught on our courses, and which the students continue to enjoy. This involves studying musical elements and nuance through physical movement - Betty particularly enjoyed joining in one 'swash-buckling' session on quick-changing bar-times in which she smashed plastic bottles like swords with Rose Last. 'Plastique animee' is another Dalcroze strand often studied by more advanced students and chamber musicians. This involves 'bringing alive' the music through organised movement, which can involve in-depth musical analysis of rhythm, melody, harmony, and form. The older boys worked with Jacqueline Vann on improvisation, and reported it was the best-ever Dalcroze work they'd done. 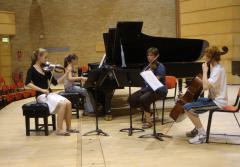 Prior to the course, all the children had produced a composition; for some of the younger children this was an improvisation. A few older students notated their pieces, at least in part. Huw Watkins spent one day coaching chamber ensembles, and one afternoon working on compositions.

Although Huw is used to teaching postgraduates at the Royal College of Music where he is a professor of composition, he coped magnificently with each student's personality and where they were coming from musically. Considering the students ranged in age from 8 to 16, this was no mean achievement. Both in the composition sessions and as chamber music coach, his approach was to treat the students as fellow musicians. Many times he encouraged our students to write down their compositional ideas so that longer pieces could be developed (if that's where the music leads!). Huw generously gave an informal concert where he played a selection of pieces from Kinderscenen by Schumann and Kinderspeil by Lachermann (a new discovery for us). This was followed by a question and answer session.

Huw is a much in demand professional chamber musician as well. He was a featured soloist with the Britten Sinfonia Orchestra at a recent Cadogan Hall concert of the BBC Proms, and will be premiering his new work with that same orchestra in a November lunch-time concert at West Road. 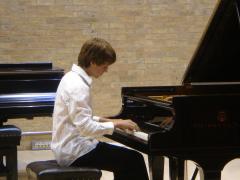 The final concert, which included the premiere of Caroline Bosenquet's little trio 'The Joggers', ran smoothly (despite a few thunder-claps during Alice's trio!) and was of a very high standard. With extra 'Bruce-practice' during the week, the 4-piano pieces had improved dramatically, resulting in a most impressive sound and near professional stage presence.

And although the choir was small, the children demonstrated their ability to learn and memorise complicated sol-fa quickly and accurately by performing a 4- part canon by Mozart. Two pairs of pianists were, without warning, asked to improvise on two pianos as part of this final show, adding to the energy of the occasion.

Earlier in the course, concerts had taken place dedicated to Kurtag's 'Games', and to pieces from 'Spectrum 4'. Sam Wood gave an impressive recital, in preparation for his up-coming diploma recital examination, of Mozart's K330 and FERVENT by Fitkin.

The aim of these workshops is to create a multi-dimensional musical environment at each level of study that provides:

We trust that both parents and children came away feeling proud, satisfied and energised from their four-day immersion in the world of piano and musicianship.