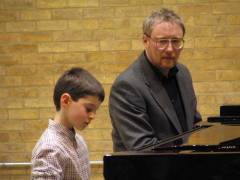 Stephen Power was one of the first of three pianists to qualify as a Suzuki teacher under the ESA in 1983 on the first European course. He subsequently studied in Japan with Dr. Suzuki and Dr. Kataoka on three occasions from 1984-1990 (the first time having been awarded a scholarship), staying for three months at a time. He was appointed as a teacher trainer by the ESA in 1994. He was Director of piano teacher training for the 'British Suzuki Institute' from 1999-2001, and was invited by the 'Federation Metodo Suzuki' of Spain to start the first Suzuki piano teacher training course in Spain 2007-2009. He has run courses for teachers and Suzuki teachers at the annual CSYM Summer School since 1995, and since that time teachers have come from Argentina, Canada, Finland, Holland, Japan, Spain, Sweden, UK, and the USA to observe. He has sat on juries in Belgium, France, and Italy, for Suzuki examinations for the ESA. Stephen has been invited to teach at workshops for Suzuki children and teachers in 9 countries, and was invited to be on the Faculty of the 'European Suzuki Association Conference' in Cork in 1985, and the 'International Suzuki Conference' in St. Andrew's in Scotland in 1991. He gave a presentation on Suzuki Piano at the 'EPTA European Conference' in Budapest. Contemporary music is a particularly strong part of the experience students have at CSYM. His students have been first prize winners at International Piano Competitions in France and Switzerland for contemporary music. Over 17 years he has been instrumental in commissioning 13 new chamber music works for CSYM students to premier at our Summer School from composers Charlotte Bray, Martin Butler, Gary Carpenter, Caroline Bosanquet, Philip Cashian, Graham Fitkin, Colin Matthews, Tarik O'Regan, Rachel Stott, and most recently Regis Campo. 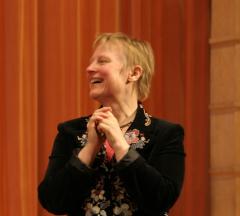 Betty Power was one of only four teacher working in Europe who Graduated (after three years of study), from Dr. Suzuki's music school in Japan in 1990. Besides her Suzuki training with Dr. Suzuki and Dr. Kataoka she has extensive practice as a Kodaly and early childhood music education specialist, having run her own programme for 0-3 years olds, Music Now! for 25 years, and taught and studied Kodaly for over 40 years. She has been invited to teach as Suzuki Workshops for children and teachers in Denmark, Spain, and the UK. Her students have been successful at a National level as pianists, choristers (who have been awarded places in, amongst others, the famous Cambridge choirs of Kings, St John's, and Jesus), as well as for composition.