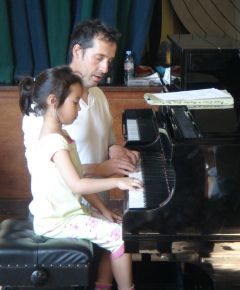 “Even the children not directly involved with the composition benefited from having a real live composer on site. It helped that Graham was friendly and approachable, conducting a workshop earlier in the week with younger children.”

a parent of a young CSYM student 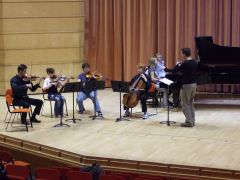 “It was a privilege to work with such committed musicians.” 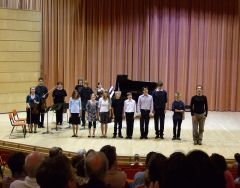 “An amazing experience from beginning to end - working so closely with the composer and working alongside such dedicated and musical students was great fun and the outcome exceeded all expectations.”

one of the adult UNCERTAIN performers

At the finale concert of CSYM’s 2007 workshop, an exciting new work by Graham Fitkin entitled Uncertain received its premiere performance. It met with exhilarated cheers and lengthy applause from a warm and receptive audience. Graham composed the work especially for CSYM, coaching and directing the performers himself during the four-day workshop.

Commissioned by the Cambridge Suzuki Young Musicians with support from the Cambridge City Council, the PRS Foundation and Blueprint, the composition was written for two pianos and string quartet. It is made up of three movements of increasing difficulty, and lasts for nine minutes.

Eleven children, aged 11—16, from Cambridge, Devon and Copenhagen played the piano parts and the string quartet was made up of a mixture of teachers, students and two very young children from Spain and Denmark. All eleven children worked on their own individual piano parts for a number of weeks before the Institute, and Graham rehearsed them over the four days of the course. 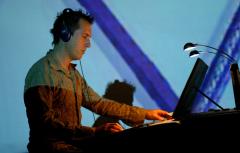 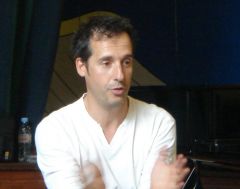 Born and brought up in Cornwall, Graham Fitkin is a composer who is also involved in conducting, performing, music production and education. He started playing the piano and composing at a young age. Early influences included his mother (a piano teacher), jazz, popular culture and Stravinsky’s ‘Rite of Spring’. He studied at Nottingham University and then travelled to the Netherlands to study with Louis Andriessen at Koninklijk Conservatorium in The Hague.

Composing for solo or multiple pianos has been central to his work. In 1985 he founded the four-pianist group, ‘Nanquidno’ and there followed commissions for Piano Circus and Kathryn Stott. Commissions followed for such ensembles as The Smith Quartet, Ensemble Bash, Sound Affairs and Icebreaker. In 1993 he was appointed Programme Director for the spnm in England. Extensive education work has included a 1995 project in the black community of Pelmamma, Soweto in South Africa, three PRS Composer in Education residencies, various regional community projects, university seminars, masterclasses and workshops around the world.

Graham also often works with acoustic and electronic instruments and collaborates with dance, film and digital media alongside concert orchestral and chamber music. He has worked frequently with choreographers around the world and with numerous ballet and dance companies, and in 1994 was awarded the Grand Prix Music for Dance Video Award.

For more details about Graham’s work, his numerous past projects, current plans, and recordings, visit his website.

Back to Workshop page